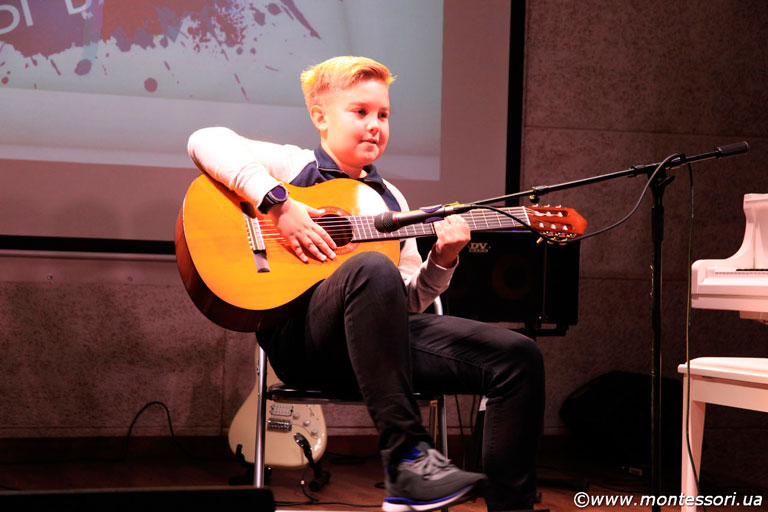 If you have ever been to a concert of a famous musical group, you probably saw how much energy and charisma comes from the guitarist. Even if he is already far beyond 60 or even over 70… Maybe the secret of the musician’s youth with a guitar lies in his instrument? ..

No one can say exactly when and where the guitar was invented, but most scientists agree that it is at least 3 thousand years old. The first mentions of a instrument with a fingerboard and a hollow resonating body are found in the Bible and date back to the second millennium BC.
There is evidence that in Europe the first 5-string guitars appeared around the 15th century in Spain, but this is a moot point. The Athens National Archaeological Museum houses an ancient sculpture of a girl playing guitar. It dates from the fourth century BC. Today, the guitar is one of the most popular instruments on which about 6.5% of the population of our planet can play. She is “included” in all walks of life and easily adapts to any style – rock, pop, blues, jazz, country, flamenco.
The guitar is almost the only instrument in the world that fits perfectly into any surroundings. It is appropriate both at a noisy party, and in a romantic atmosphere under the stars. On a good modern guitar, you can play almost anything your heart desires – from a yard chanson to a sophisticated classic.

GUITARISTS WHO CHANGED THE WORLD

Even in our time, a person with a guitar is rarely perceived as a serious musician. It’s a matter of a century ago – at that time the guitar never sounded at large-scale concerts and was not studied at any musical university. For example, in Spain they played it mainly on holidays, most often it was an accompaniment to folk dances.
Fortunately, over time, the guitar acquired several fiery admirers who took it to a whole new level. Let’s remember their names.

Famous Spanish composer, musician and teacher of the late XIX – early XX century. One of the first professional guitarists in the world. As a child, he heard the game of the blind guitarist Manuel Gonzalez several times and was amazed at his skill. A few years later, Francisco made him his teacher.
At the time when F. Tarrega was studying at the Madrid Conservatory, the guitar was not yet taught there. Despite this, he managed to become an unsurpassed virtuoso guitarist, to the level of which not one of his contemporaries could reach. Francisco Tarrega daily honed his skills even at the peak of fame. He created about 120 arrangements for the guitar and 78 original works, played many brilliant concerts in Spain and abroad.

Another outstanding Spanish guitarist and teacher, father of modern academic guitar, 1958 Grammy Award for best recording of solo academic music. One of the few musicians in whose game critics could not find a single flaw.
As a child, Andres Segovia was taught to play the violin, cello and piano, but he burst into flames with a completely non-prestigious instrument at that time – the guitar. He devoted all his creative powers to proving that the guitar should be studied in conservatories, that it can sound no less worthy than the violin and piano, that its place is not only at parties, but also in large concert halls.
Andres Segovia lived a long (94 years!), Fruitful life worthy of imitation – he brought up a whole generation of virtuoso guitarists, raised the art of guitar to a high professional level. He shifted a lot of monumental classical works, including JS Bach, to the guitar and played them at the best concert venues in the world.

A brilliant American musician, singer and composer of the 20th century. Time and Rolling Stone magazines unanimously called him the greatest guitar player of all time. He opened to people the electric guitar in its entirety – significantly expanded its range, showed new sound possibilities.
Being left-handed from birth, for some time Jimi was forced to tune the guitar to his right hand, since his father believed that any left-handedness was from the devil. As a result, he, without realizing it, mastered the revolutionary “upside-down” technique – he learned to turn the right-hand guitar and play it with his left hand.
After the death of Jimi Hendrix, his favorite guitar was auctioned off for £ 100,000.

Do you know a lot of instruments that have been played for several millennia in a row, but they still sound fresh and modern?.. The guitar in this sense is beyond competition. In its content, it can only be compared with a human heart – sensitive, touching, but at the same time strong. She knows how to rejoice, empathize and, most importantly, sound in unison with the soul.