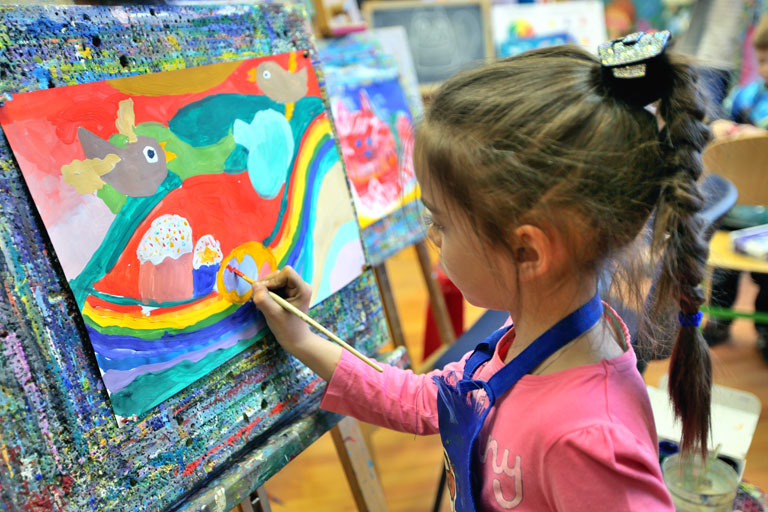 Typically, a young child is dominated not by logical, but by imaginative thinking. Through the creation of images, the baby not only expresses himself, but also prepares fertile ground for subsequent intellectual growth.
Aristotle also knew about the beneficial effects of drawing on children. He argued that this type of creativity makes the child more harmonious and contributes to its diverse development.

Unfortunately, modern parents rarely realize that the so-called creativity is formed even in preschool age with the help of active creative activity. Instead of letting the kids express themselves, for example, through drawing, they almost from the cradle try to develop mechanical memory and logic in them.

Drawing their masterpieces, children generate images, find associative connections between objects, learn to discover new qualities in them and consider them from different angles. Even when a child becomes an adult, the ability brought from childhood to think creatively and constantly create something new does not disappear. It stays with a person forever and inevitably affects all areas of his life.

WHAT THE DRAWING LESSONS GIVE TO CHILDREN

When giving a child to an art school, it is important to understand that the main value of painting lessons is not what pictures will be obtained at the output, but in the creative process itself. What happens to the baby while painting? ..

THE GENIUS WHICH THE PAINTING BROUGHT

Sometimes we hear that some prominent personalities – singers, actors and even poets – also paint … But, in fact, the opposite is true – they first painted, and only then found themselves in life. Let’s look at some examples…

Paul McCartney. Few people know that the legendary rock musician from childhood was fond of painting. He knew how to “capture images” not only in music, but also on paper. Paul was very fond of drawing, but was terribly afraid that people might not perceive his work. After many years, drawings by Paul McCartney, accidentally found in the attic, will be highly appreciated by critics and put up for auction.

Jim Carrey is another striking example of a genius keen on drawing. Awesome actor and screenwriter, one of the highest paid comedians in the world. “I draw very often. This is my great passion, which I have been obsessed with since childhood, ”says Jim. Since childhood, the house of the future artist was crammed to the brim with paintings, they were in all rooms, in every corner. Even now, in between filming, Jim Carrey continues to write his canvases.

Taras Shevchenko. And, finally, we recall our outstanding poet-kobzar Taras Shevchenko. He was drawn to painting with extraordinary power. He ran away from home, found himself teacher-painters, secretly painted at night, until his master moved to Petersburg and gave him to study with the famous painter. Further, a ransom from serfdom, study at the St. Petersburg Academy of Painting, close interaction with Karl Bryullov … As a result, Shevchenko did not become a famous artist, but he grew up into a great poet – his artistic images grew into literary ones.

Thus, in order to be fully realized in adult life, you need to be a creative person from childhood – a painter, creator, creator. Encouraging a child to draw, we give him much more than the opportunity to once become an artist. We give him a chance to become a Man…